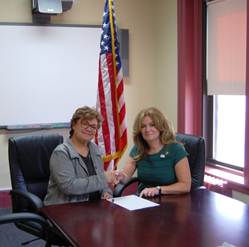 The Putnam County Legislature overwhelmingly approved the contract with CSEA Local 1850 on Tuesday, April 1 at the regular monthly meeting with seven legislators voting in favor of the contract and two legislators abstaining due to possible conflicts of interest. No legislator voted against the agreement.
The proposed contract back dates to 2012 and runs through 2016. The CSEA union represents the largest group of county employees and includes health and social services, highway and clerical staff.
I am so pleased that we have finally been able to agree to terms with the CSEA,” said County Executive MaryEllen Odell. “We are proud of our workforce and appreciate their dedication to the county. They truly are the backbone of the county. This agreement is fair to both our CSEA employees and our property taxpayers that pay the bill.”
In the agreement the workers would not get a raise in pay for 2012 or 2013. A $500.00 payment will be given in 2014 and then again in 2015. Also in 2015 the union members will receive a 1.5 percent raise on top of the payment. A 2 percent raise has been agreed on for 2016. The contract has a total increase of 3.5 percent over the 5 years. The previous contract with the CSEA, which was negotiated before Odell became county executive, realized a 16.5 percent increase from 2007-2011.
Additionally in the new contract, union members would now have an alternative discipline procedure made available to them designed to help improve productivity.
“With unfunded mandates, the property tax cap and the economic downturn all affecting our budget, Putnam County has been like most families, and has had to do with less for the past few years,” Odell.  “As a result of programs we have been able to implement to generate additional revenue for the county and signs of an improved economic condition in the region, we are able to agree to reasonable gestures of good faith and future salary increases.”
CSEA Putnam County Unity 8150 President Janet Gomez-Canaday also thinks the agreement balances the needs of the union members with those of the taxpayers. “after working since 2011 to reach this agreement, we are pleased to have a deal that is fair to both our members and Putnam County taxpayers,” said Gomez-Canaday. “With our members doing so much more with less, it will provide some much-needed stability. I appreciate County Executive Odell’s leadership in reaching a resolution after a long period of negotiations and I am grateful for the expertise of CSEA Chief Negotiator Glenn Blackman and our hardworking CSEA negotiating team.”
Legislator Ginny Nacerino, who chairs the personnel committee, appreciated the union members understanding of how the economic climate has changed, “Working in a school district, I know that raises of years ago are just not feasible anymore,” she said. “I am glad that the union members understand the impact of these numbers in today’s economic climate and all that we are faced with as a county. I am glad that everyone is happy and the democratic process prevailed”
“I commend County Executive Odell and the union for reaching a fair and fiscally responsible contract.,” said  Legislature Chairman Carl Albano. “This is a prime example of all sides working together in these difficult times to reach the best results for all. We are moving the county in a positive direction.”