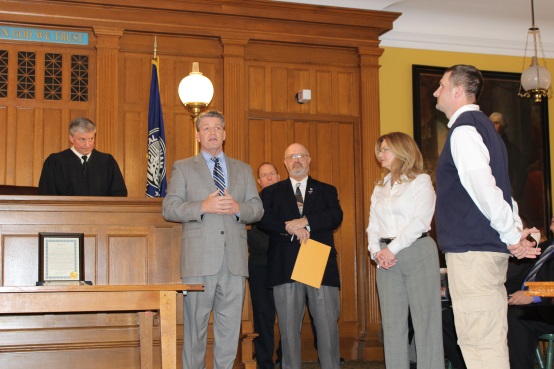 “Our journeys are all different, but we all ended up with addiction anyway,” said Jason Fell of Mahopac, a graduate the Putnam County Judicial Diversion/Treatment Court Program, at the January graduation ceremony held at the county’s historic courthouse in Carmel. “We all have the same goal—to beat addiction and have a life worth living.”

Fell was one of seven graduates this month from the Drug Treatment Court program, an alternative to incarceration program where a coordinated team effort of the assigned judge, court staff, prosecution, defense counsel, probation, sheriff’s department, mental health, social services and treatment professionals actively intervene and break the cycle of substance abuse, addiction and crime. Participation is offered to those who would otherwise be facing for offenses that are drug or alcohol related. The program takes about two years for a participant to complete.

This session had graduates from various walks of life. There were several young people some with typical childhoods and others who were brought up in less than stellar conditions, a successful seasoned professional and a war hero.

Fell is a U.S. Marine who honorable served his county from 1990-1996, where he participated in combat in Operation Desert Storm and Somalia.  After the terrorist attacks on September 11, 2001, Fell decided to re-enlist and was honorable discharged in 2008.

Fell had no prior history of chemical dependency until he was wounded in action and was prescribed opioid medications to treat the pain of his injuries. Subsequently, he became addicted and towards the very end of his battle with addiction resorted to using heroin.

Since being in treatment court program, Fell has been dutifully following the program and has turned his life around. He completed all phases of treatment at Montrose Veteran’s Hospital—including inpatient, residential and outpatient substance abuse and mental health services. He is working full-time for a home improvement company and continues to attend recommended treatment.

“I can tell you first hand that addiction has taken me down lower than I have ever been,” said Fell. “Through the past couple of years I found a life worth living for.”

Another graduate, who was skeptical of the program when he entered it two years ago, offered words of wisdom to the participants still going through the treatment program.

“I would recommend that the current participants take full advantage of the opportunity before them.” He said. “They may never get it again. They need to devote themselves to the program and the help available to them.” Talking directly to the program participants he added. “However, change must come from within you. You must change yourself; others around you are just there to help you along the way.”

Judge James Reitz, who oversees the program, is passionate about giving people who are willing to work on themselves a second chance and an opportunity to stay out of the prison system.

“Many enter the program and are uncertain that they have what it takes to go through the program, but they choose to do it to avoid going to state prison,” said Judge Reitz. “Then over the next two years they get our full-team support. We support them as long as they make the effort to continue in the program. It is not always easy and at times there are some bumps along the way. The people who graduate transform their lives along the way. They make the decision to be sober. We cannot force anyone. It has to be something they chose to do on their own. We just give them a fighting chance.”

Fell feels that Judge Reitz does not give the drug court treatment team enough credit. “I know you say that we, the graduates, did it ourselves and I saved my own life, but all of you, the drug treatment court team, were a big part of saving my life.”

County Executive MaryEllen Odell has been an advocate for the Drug Treatment Court since she took office in 2011. She made the drug treatment court coordinator position a full-time county position when Albany cut the funding for the program. Odell also attends the graduation ceremonies every month and is always inspired by the stories of those completing the program.

“Every person who graduates from the Drug Treatment Court has a story,” said Odell. “To hear about the obstacles each one overcame and the steps each one took to be a productive member of society confirms my belief on the importance of education and treatment. On Oct. 1, my administration announced our 2015 budget and we basically said that this county would declare itself as the One Army on the War on Addiction and Substance Abuse.  We are committed to combating the addiction epidemic on multiple fronts—through education, awareness, treatment and law.”

State Senator Terrence Murphy, who has been named the chairman of the NYS Joint Task Force on Heroin and Opioid Addiction, was impressed with the program.

“This type of initiative needs to happen everywhere,” he said.  “Here we stand before seven heroes who have committed themselves to sobriety and turned their lives around.  They remind us that addiction knows no boundaries. It hits people of any ethnicity, age, gender or profession. We need to do whatever we can to get the people who suffer from addiction the help that they need and make our penalties for traffickers much stricter.”

The next graduation ceremony will be held in March.