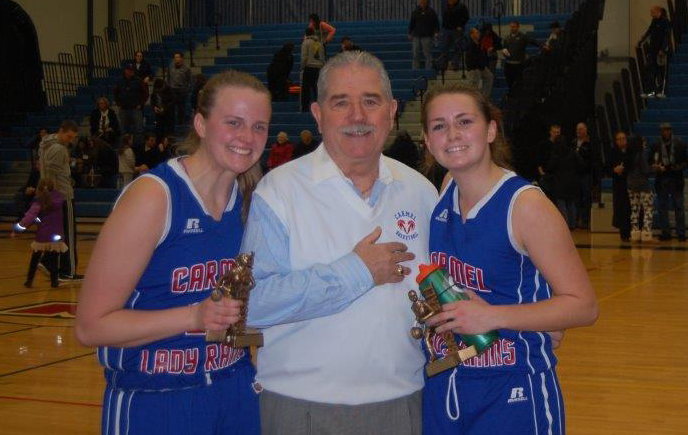 “Coach O’Hare has taught us so much, as not only players but as leaders and as good people,” said Kelly Oliver, who is this year’s team captain with Caitlin Murphy. “Being able to deliver this win to him means so much to me and the rest of the team.”

The Lady Rams’ first win with O’Hare at the helm was on Friday, Jan. 3, 1997. The team defeated the Ramapo Gryphons 57-56. Some of the players on the team was Jeannine Weaver, Amber Krajeski, Kristan Johnson and Candace Clark.

“It has been my pleasure to know Dan since 1991, when his daughter, Brianne and my daughter, Hope, first met as three-year-olds,” said Putnam County Executive MaryEllen Odell. “His passion for the game has led him to instill into the several hundred young ladies in his charge over the years the positive sense of ‘can do,’ a desire to achieve and to compete as a team. He has left an indelible impression on all the Lady Rams who have played on his teams.”

During his tenure as coach for the Lady Rams, O’Hare’s teams have played in the Final Four in the state Section 1 playoffs and in numerous league championships.