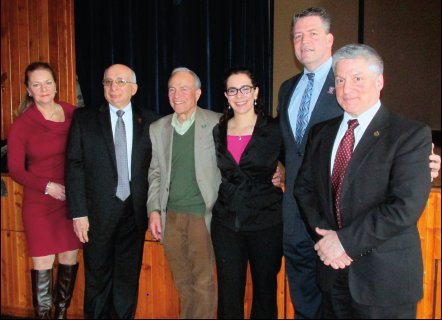 Article from the Mahopac News.

The Men’s Club of Temple Beth Shalom held its 16th annual Millennium Breakfast Sunday morning at its synagogue in Mahopac where guest speakers from both the political and religious spectrum discussed the challenges that lay ahead in 2015, particularly the heroin epidemic that has plagued the region for the past several years.

“It’s about getting people help and getting treatment and making good decisions,” Reitz told the audience. “We just had seven people graduate who otherwise would probably be dead.”

Reitz said there are currently 110 people in the treatment court program.

“We hold them accountable,” he said. “They will be working and productive and off of public assistance.”

Reitz said he’s fortunate to work in a community that has been supportive of programs such as the treatment court, but added that more people need to know about it. “This is a great community,” he said. “It’s a privilege to serve as a judge here. But the treatment court should not be a well-kept secret. People should know that there is a $20,000 savings for each person it keeps out of county jail.”

“It was really wonderful,” the county executive said. “I had the privilege to be at the first one. I didn’t even know they existed. Itwas an incredible eye-opener. They are literally giving these kids a second lease on life.

Murphy, who was elected to the senate seat last November, was appointed chair of the New York State Legislature’s Heroin Task Force.

“We have a major problem here and kids are literally dying,” he said. “There are no boundaries [to the heroin epidemic]. No one is immune to this.”

Murphy noted that 28 regions throughout the country have been labeled as “highdensity drug-trafficking areas” by the federal government and four of them are here in the mid-Hudson Valley, including Putnam County. He said  his goal as a state senator is to craft legislation to help combat the drug problem.

“It’s been an ongoing lesson for me [since elected],” he said. “But the No. 1 issue is to combat this heroin issue. I am all in on this.”

Odell’s speech focused on the need for better communication between the county, its agencies and its citizens, in order to spark new ideas and grow the economy.

“We weren’t communicating with each other, which is a shame because the county has so much to offer,” she said. “It’s about sharing ideas. Where do we see us going? My ideas come from sitting in forums like this and talking to people standing on line at the grocery store.”

Odell noted that Putnam County is at the hub of the Hudson Valley, which gives it the opportunity to reach out to its neighbors in Connecticut and Dutchess County.

“We have the opportunity to bring in our neighbors and get them to spend their money here and help increase our sales tax revenue,” she said. “Main Street is what drives our economy.”

In her speech, Rabbi Friedman-King noted that she was marking her fifth month as rabbi for Temple Beth Shalom, and said that during that time she’s discovered how kind and supportive the Mahopac community is.

“People here go above and beyond,” she said.” There is so much support in Mahopac. Everyone wants to know how they can help the community flourish. As a Jewish community, how do we get to know each other and celebrate each other?”

The rabbi noted that several congregations from Westchester and Putnam counties recently came together to celebrate Hanukkah at the Jefferson Valley Mall and light their new giant menorah.

“It was an opportunity to celebrate our Jewish identity together,” she said. “But unfortunately, the commitment to organized religion is down. We need to be constantly adapting and changing. The Jewish community does well at building connections. I hope to deepen those connections and expand them. I am impressed by the way this community holds and embraces each other. Everyone is willing to jump in and help out. That’s not a small thing.”

Deacon Scarfi noted that Temple Beth Shalom is one of the top contributors to his church’s food pantry, but said the community needs to continue to work towards helping out those in need.

“The biggest challenge we have is how to build and support families,” he told the audience. “When there are family structures, problems decrease dramatically. Right now, we have serious social issues and we have to reach out, no matter what religion you are.”

Besides hunger, Scarfi noted that housing and heating continue to be problems in the region.

“Some are starting to run out of [heating oil] and there is no way to help them,” said the deacon. “What do people do—freeze? We must come together and do our part. I will do everything I can, but our bank is not unlimited. We need to work hard to keep this community the way we feel it should be. I wish I had a crystal ball that would show me a rosy picture.”