CARMEL, N.Y. (May 1,2014) –   County Executive MaryEllen Odell led the National Day of Prayer observance hosted by the Putnam County Leadership Breakfast Committee on Thursday, May 1 at the Spain Cornerstone Park in Carmel, N.Y. The event is an annual observance created in 1952 by a joint resolution of the United States Congress, signed by President Harry Truman for the purpose of communicating the need for personal prayer for our nation and its leaders. 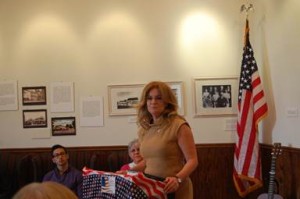 “This day of prayer is not about denomination, it is a sign of unity that spans across religions,” said Odell. “It is about keeping our leaders, the nation, and those who fight to keep us safe and free on our minds and in our hearts.”
Odell was joined by Barbara Judell and Donna Scannapieco who were the hosts of the Prayer Breakfast.  The Rev. Keith Beverly, pastor at Carmel Baptist, lead the Pledge of Allegiance. Attorney Rob Weiss, County Clerk Dennis Sant, Sheriff Don Smith. Individual prayers were said for the nation, chaplains, government leaders, and those in law enforcement, as well as U.S. Armed Forces and for their families. There was also a prayer for peace in Jerusalem.
Cris Lenron, worship leader of The Mission Church, sang “America the Beautiful” and “God Bless America.”