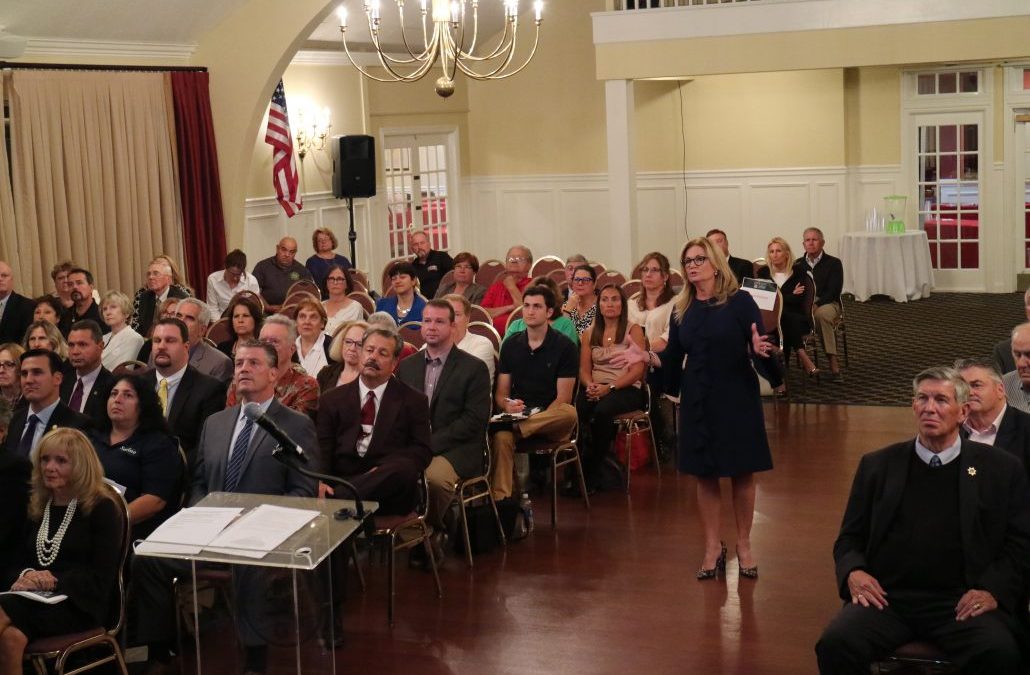 MAHOPAC, NY – Putnam County Executive MaryEllen Odell presented the $155.3 million proposed 2018 county budget to the legislature at a public meeting held at Putnam County Golf Course on Thursday, Oct. 6. The budget, which is within the New York State imposed tax cap, has a net increase of $2.3 million over the 2017 adopted budget, which reflects a 1.5% spending increase.

“It is a challenge every year to develop a budget that keeps within the Albany imposed tax cap while delivering mandated services, providing the quality of life needs of the residents as well as the needs of our employees and retirees; and planning for a fiscally secure future,” County Executive Odell said. “However, because of the efforts this administration puts forth each day we continue to be able to meet that challenge.”

“County Executive MaryEllen Odell unveiled the 2018 tentative budget and once again she did not disappoint,” said Ginny Nacerino, Chairwoman of the Putnam County Legislature.  “For the sixth consecutive year, she has delivered a fiscally sound budget and stayed within the cap.  In addition to fiscal accountability, she places a high priority on social responsibilities, which encompasses all the departments and agencies that contribute to our wonderful quality of life here in Putnam County. As a former legislator, herself, she fully understands and appreciates the tremendous undertaking the Legislature assumes to adopt a responsible budget.  By delivering a fiscally conservative and tight budget, the county executive has provided the Legislature the advantage of working with a solid foundation.  Based on the last five years, I do not anticipate any dramatic changes.  The county is in good shape and that speak volumes to County Executive MaryEllen Odell’s leadership.”

“What this administration does not do is ‘kick the can down the road,’ we develop a plan,” County Executive Odell said. “Since Dec. 31, 2011, our administration, in partnership with the Legislature, has implemented sound debt management practices which reduced County debt.”

The county executive anticipates that the budget will allow Putnam to continue to earn its Moody’s Aa2 bond rating. Odell also noted that the county has reduced its long-term debt by 15% since she came into office in 2011. It has also eliminated its short-term debt of $17.2 million completely.

Seventy percent of the proposed budget, or $107.6 million, consists of the more than 200 mandated programs, which are set by the Federal or State governments with no or very limited input from Putnam County. The other $47.7 million, or 30% of the proposed budget, is made up of quality of life costs which include: Sheriff Department’s road patrol, Office of Senior Resources, retiree health benefits, emergency services, parks and recreation, PART system, and outside agencies.

County Executive Odell unveiled a plan to find potential cost savings for the county while being able to provide the same or improved services to the county’s retiree health benefits. The county is offering an alternative to the New York State Health Insurance Program through Benistar that eligible retirees can voluntarily switch to. Benistar offers a low option and a high option for both individuals and families that cost equal to or less than the current insurance plan. The savings will be shared by the county and the retirees proportional to the contribution. The estimated total savings by offering the Benistar options is $182,181.

More information about the new insurance options will be available to the retirees by mid-October through the Personnel Department.