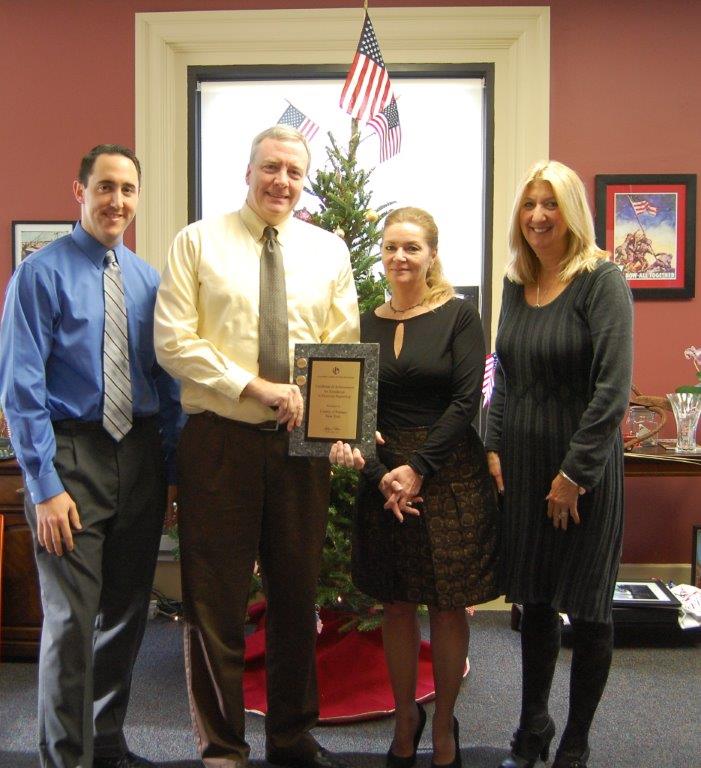 The 10 wood framed plaques line the narrow hallway leading to Putnam County Commissioner of Finance William Carlin’s office; six eye level rectangles in a row before his doorway, four on the wall just beyond his office. Each frame holds in it a Government Finance Officers Association (GFOA) Certificate of Achievement for Excellence in Financial Reporting and each has been awarded to the Putnam County’s Department of Finance.  The first is dated December 31, 2001; the most recent award is memorialized with a brass medallion dated 2013 which denotes the close of the 2013 fiscal year. The 2013 medallion is directly under the department’s 2012 award.

“Commissioner Carlin’s department has received so many of these awards. He keeps his eyes firmly focused on our finances and we are certainly better for it as a county,” said County Executive MaryEllen Odell. “It is a testament not only to Bill’s great talent but to that of his outstanding staff. We couldn’t be more proud of our people in the Finance Department. ”

Carlin would not take credit for the award. Rather, he said, it was the result of a group effort throughout County government.

“The credit for this recognition goes to all the fiscal staff throughout County government that daily carry out our commitment to open and transparent government,” he said.

The Certificate of Achievement is the highest form of recognition in the area of governmental accounting and financial reporting and represents a significant accomplishment by a government and its management.