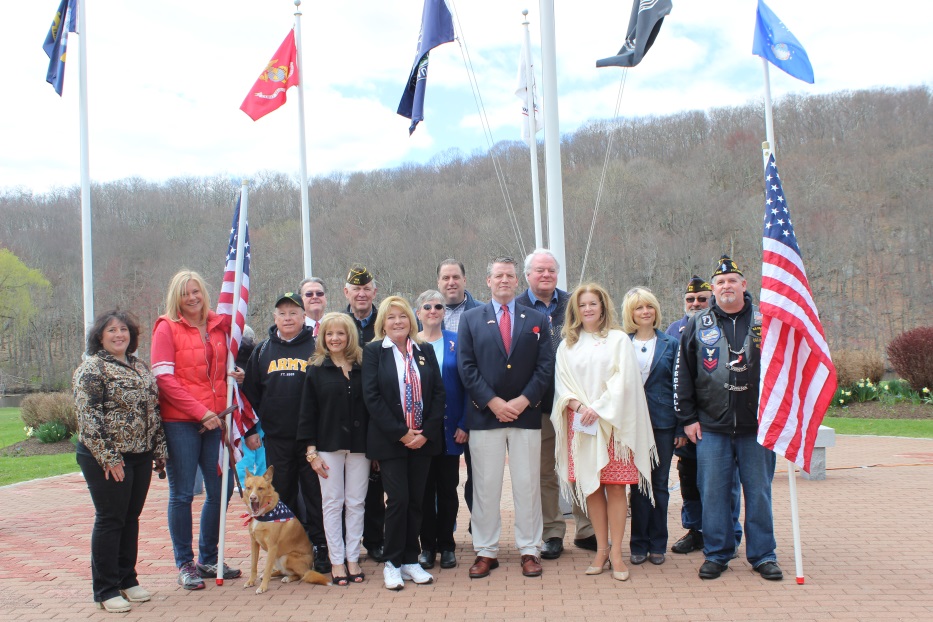 County Executive MaryEllen Odell joined Veterans, families and other elected officials in celebrating being an American and all that it represents at the Loyalty Day Jamboree at Putnam County Veterans Memorial Park in Kent on Sunday, April 26. The annual event, which is held on the last Sunday in April, was organized by the Putnam County Council Veterans of Foreign War. VFW Brewster Post 672 was host to this year’s event.

“Putnam County has a proud tradition of belief in liberty, equality and justice—values defended by our troops over the course of generations,” said Odell. “The people of Putnam County are inspired by the servicemen and women, the military spouses and family who stand by their loved ones and the countless individuals in communities who support them.”

Loyalty Day had its origins with the Veterans of Foreign Wars. It began with the VFW’s initiation of Americanization Day in 1921 as a counter to the Communist May 1 celebration of the Russian Revolution. It grew to the point where on May 1, 1930, ten thousand VFW members held a patriotic rally at Union Square in NYC. Then, in 1949, the VFW adopted a resolution and May 1 began its evolution into Loyalty Day.

Loyalty Day was made an official holiday by the U. S. Congress on July 18, 1958 and President Dwight D. Eisenhower proclaimed May 1, 1959 as the first official observance of Loyalty Day.

“It is truly an honor to stand among you,” said State Senator Terrence Murphy, who represents the 40th Senate District, to the Veterans. “We are celebrating the freedom that you defended for us.  It is our duty to do right by those who have served and those who continue to serve in the Armed Forces.”

Putnam County will be recognizing Veterans and current military personnel at events throughout the month of May.

The Putnam County Sheriff’s Office will be christening its four marine vessels after the names of prominent local Veterans at Veterans Park on Thursday, May 14 at 7 p.m.

On Saturday, May 16, there will be the annual Row of Honor Kickoff Pancake Breakfast from 9 to 11 a.m. at the VFW Carmel Post 1374, located at 32 Gleneida Avenue in Carmel. The breakfast is the official start of the spring Row of Honor season.

Twice a year, for Memorial Day and Veterans Day, more than 100 flags with the names of Veterans line the shore of Lake Gleneida. The flag line has been recognized as the Row of Honor. This historic observation has become a cherished tradition for residents and has drawn national attention to Putnam County.

With a $100 donation, the name of your loved one can appear on a flag. Proceeds will go toward the return of The Vietnam Traveling Memorial Wall to Putnam County Veterans Memorial Park in September.

To RSVP for the pancake breakfast or to order your flag call 845-808-1620 or visit PutnamCountyNY.gov/ROH. Checks can be made payable to the Joint Veterans Council to PC Veterans Services Agency, Donald B. Smith Government Campus, 110 Old Route 6, Bldg. 3, Carmel, N.Y. 10512.