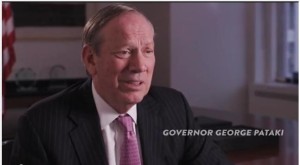 Putnam Valley Supervisor Rob Tendy emphasized Odell’s accessibility, openness and focus on delivering results for communities like his, while Southeast Councilwoman Liz Hudak described the County Executive’s “ability to move back a little bit, listen to everybody and to do the right thing” concluding “That’s Mary Ellen.”

With strengthening the county’s small business community and generating economic development to grow jobs and attract investment capital to Putnam County as major goals of the Odell administration, Putnam Chamber of Commerce President Jennifer Maher and President of the Putnam County Industrial Development Agency Neal Sullivan both noted her action oriented approach to matters of economic development. Maher states “she wants to move forward, and if she thinks its going to be good for the business community and the community at-large she’s all for it.”

Odell’s vision for Putnam County has won her praise from Pataki and Bernadette Castro who served as his Former Commissioner of Parks, Recreation and Historic Preservation while he was Governor. As an example, Castro cites her recent visit to the Putnam County Golf Course that has been revitalized under the County Executive’s leadership as part of a plan to make it a tourist destination and a revenue generator for the county. “The County Executive has a vision,” Castro says “and the vision is bring more people to Putnam and get the people of Putnam County to discover what they have.”