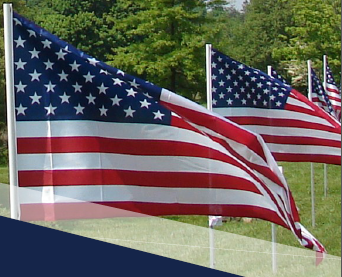 “The willingness with which our young people are likely to serve in any war, no matter how justified, shall be directly proportional to how they perceive the Veterans of earlier wars were treated and appreciated by their nation.”   George Washington

County Executive MaryEllen Odell will hold a press conference at 3:30 p.m. on the shores of Lake Gleneida on Tuesday, Oct. 21 to announce the opening date for this year’s Veterans Day Row of Honor as Putnam County recognizes those who have served in the military this Veterans Day.  The Row of Honor is an installation of American-made flags that border Gleneida Avenue on the shores of Lake Gleneida in the Hamlet of Carmel.

“Each Veteran’s Day, we assemble our Row of Honor to give residents the opportunity to publicly acknowledge and thank those who have served their country. In turn, funds are raised to support programs run by our Joint Veterans Council,” said Odell.

The Row of Honor project is a group venture of the Putnam County Joint Veterans Council, Putnam County Tourism and Putnam County Executive and the Legislature. While each branch of the American Armed Forces has been represented in the past, additional organizations have asked and received permission to have their flags added to the Row of Honor as well. The flags will remain on display through the 21st of November.

Sponsorship of the American-made flags is meant to raise awareness and funds for various veterans’ projects which Odell said would “assist our veterans and the veteran community within the county.” In the past, the sponsored flags have borne the names of loved ones who died while serving in the military, those presently serving on active duty or simply messages of thanks to area veterans from friends and family.

Odell first initiated the Row of Honor in May of 2013 when the stars and stripes were erected shortly before Memorial Day. Since then, the flags have stood colorfully along Gleneida Avenue for each Veterans and Memorial Day. It is a tradition Odell feels strongly about supporting.

“While setting aside a particular day to honor our veterans is important, I don’t believe it is something that should be done only once a year. As the recipients of the rights and the freedoms they have helped to preserve, we should appreciate and thank our veterans daily,” she said.

Veterans Day is commemorated each year on November 11 and is a federal holiday. It marks the official anniversary of the end of World War I when hostilities with Germany ceased on the 11th hour of the 11th day of the 11th month in 1918.

Sponsorship for a Row of Honor flag is $100. To order a flag, e-mail: rowofhonor@putnamcountyny.gov or call Mimi at Putnam County Veterans Service Agency at (845) 808-1620.