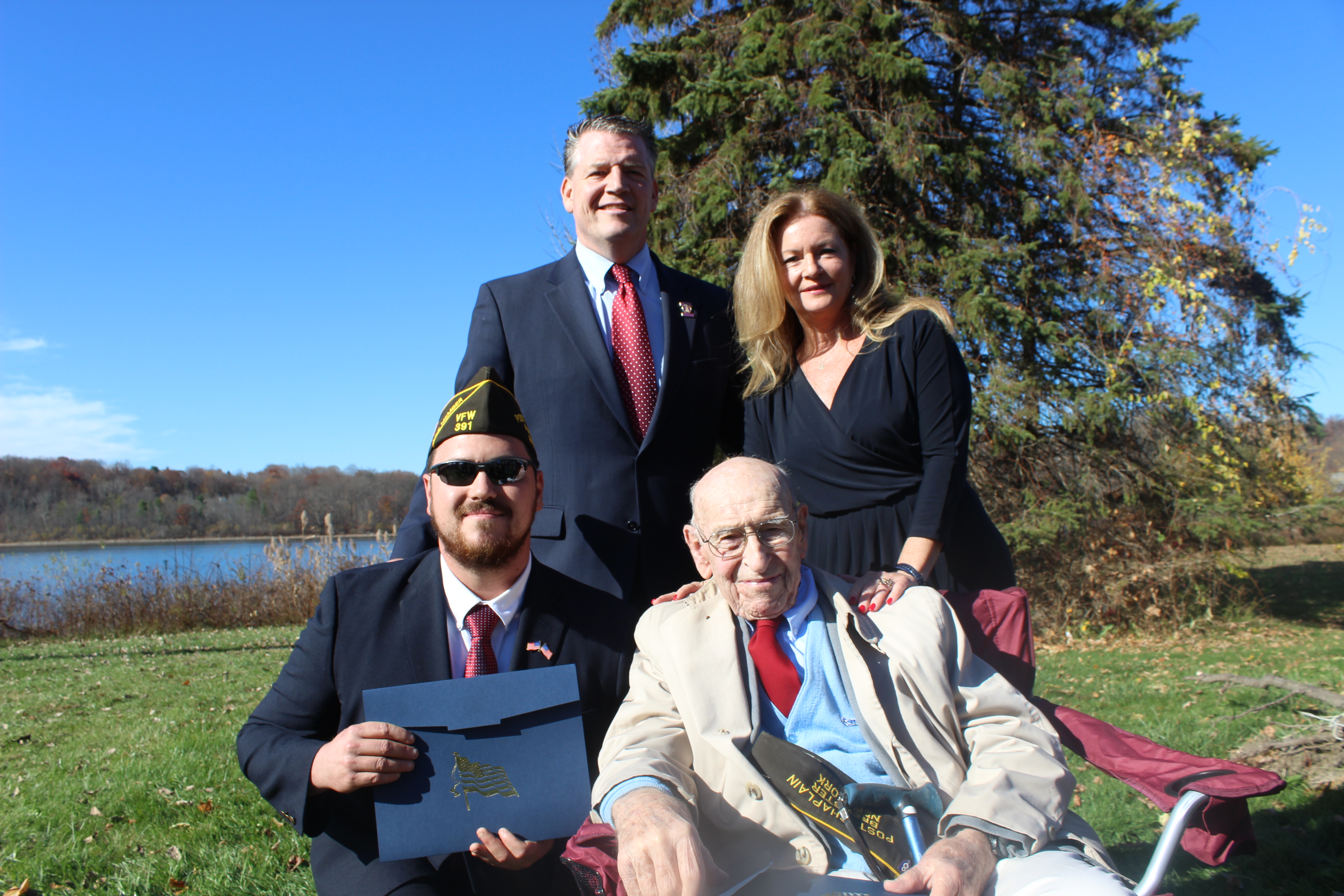 CARMEL, N.Y. – County Executive MaryEllen Odell was joined by local elected and appointed officials to recognize the efforts of a Bob Palmer, a World War II Veteran from Brewster, and Ryan Lepore, an Iraq Veteran from Putnam Valley, during the opening ceremony of the Veterans Day Row of Honor, held on Monday, Nov. 9 along Lake Gleneida. Up-and-coming music sensation Hailey Knox, a Carmel High School senior, sang the National Anthem.

“Veterans Day is about remembering the efforts of all the men and women who have served in the U.S. Armed Forces,” said Odell. “We decided to honor one of our oldest Veterans and one of our youngest Veterans to recognize the Veterans who walk amongst us every day.”

Palmer, a third-generation military service man, served in the United States Army from August 1942 to December 1945, achieving the rank of Platoon Sergeant and commanding a 16-man gun section. He was part of the 445 Anti-aircraft Artillery Battalion in the 8th Infantry Division during the European campaign of World War II. During his service, Palmer earned the American Service Medal, the European-African-Middle Eastern Service Medal, the World War II Victory Medal and the Good Conduct Medal.

Following his WWII service, Palmer worked for Conrail for 41 years. He is a Life Member of the Brewster Veterans of Foreign Wars Post 672 and served as its Chaplain for 20 years.

For three decades, Palmer categorized and placed over 1,200 American flags on Veterans graves from Southeast- mostly by himself.  In 2012, the torch was passed and the “The Bob Palmer Project” was started- not to duplicate his singular effort- but to follow his intent. The Brewster/Southeast community now places the more than 1,200 American flags on the graves of Veterans before Memorial Day, to not only honor and remember our veterans, but to honor Bob Palmer and his commitment to the community and Veterans.

Lepore who was a freshman at Putnam Valley High School on September 11, 2001, felt it was his duty to serve his country. After graduating in 2005, he followed his older brother Richard’s footsteps and joined the Army.

Stationed in Vilseck, Germany, Lepore was deployed to Iraq for 15 months in between 2007 and 2008, during “The Surge.” He was a cannon crewmember on a Howitzer Cannon and his unit conducted combat patrols and raids in a hostile environment. Lepore was honorably discharged with the rank of private first class in 2010.

“Our freedom isn’t free and that is what Veterans Day is all about,” said Sheriff Donald B. Smith. “It is the day we honor all the Veterans and we say ‘Thank you.’ We remember nor only those who made the ultimate sacrifice but those who put their lives on hold and marched to the sound of the gun shots. On Veterans Day we need to also remember those soldiers who are currently serving in the U.S. Armed Forces.”

The Row of Honor is the installation of over 250 American flags with the names of Veterans, law enforcement officers and first responders, lines along the shores of Lake Gleneida to honor the men and women who served, or continue to serve, to protect us and defend our freedoms. It is on display twice a year to observe Memorial Day and Veterans Day.

“We have 250 flags here on Lake Gleneida,” said Odell. “The program has been very successful and it has been noted nationally and throughout the Hudson Valley region. Visitors are stopping by and spending time admiring the flags and honoring those whose names appear on the tags. It is a touching way to show your respect to our Veterans and our veteran First Responders.”

The Row of Honor began in 2013 and was so well received by the public that Odell decided to make it a semi-annual event. The Row of Honor is a fundraising venture among the Joint Veterans Council, Putnam County Tourism and Putnam County government. This year, money raised through sponsorships of the flags will be used to support the Putnam County Veterans and Military Museum, which is located in Veterans Memorial Park in Kent.

“Seeing the sea of American flags is incredible,” said State Senator Terrence Murphy. “I am honored to stand here today. It is important that we do what we can for our Veterans. That is why I am so pleased to announce that the passage of the Vietnam Veterans’ Equality Act has been signed into law by Governor Cuomo. The Vietnam Veterans of America will now be recognized by New York State as an official benevolent order. It will now have the status and resources to better serve New York’s Vietnam Veterans, along with the other rights and privileges conferred to other traditional Veterans service organizations.”

Sponsorships may be purchased for $100 per flag. Checks should be made out to the Joint Veterans Council and sent to the Putnam County Veterans Affairs Office, Donald B. Smith Government Campus, 110 Old Route 6, Bldg. 3, Carmel, NY 10512. For further information, call Art Hanley at (845) 808-1620 or go online toputnamcountyny.com/roh.