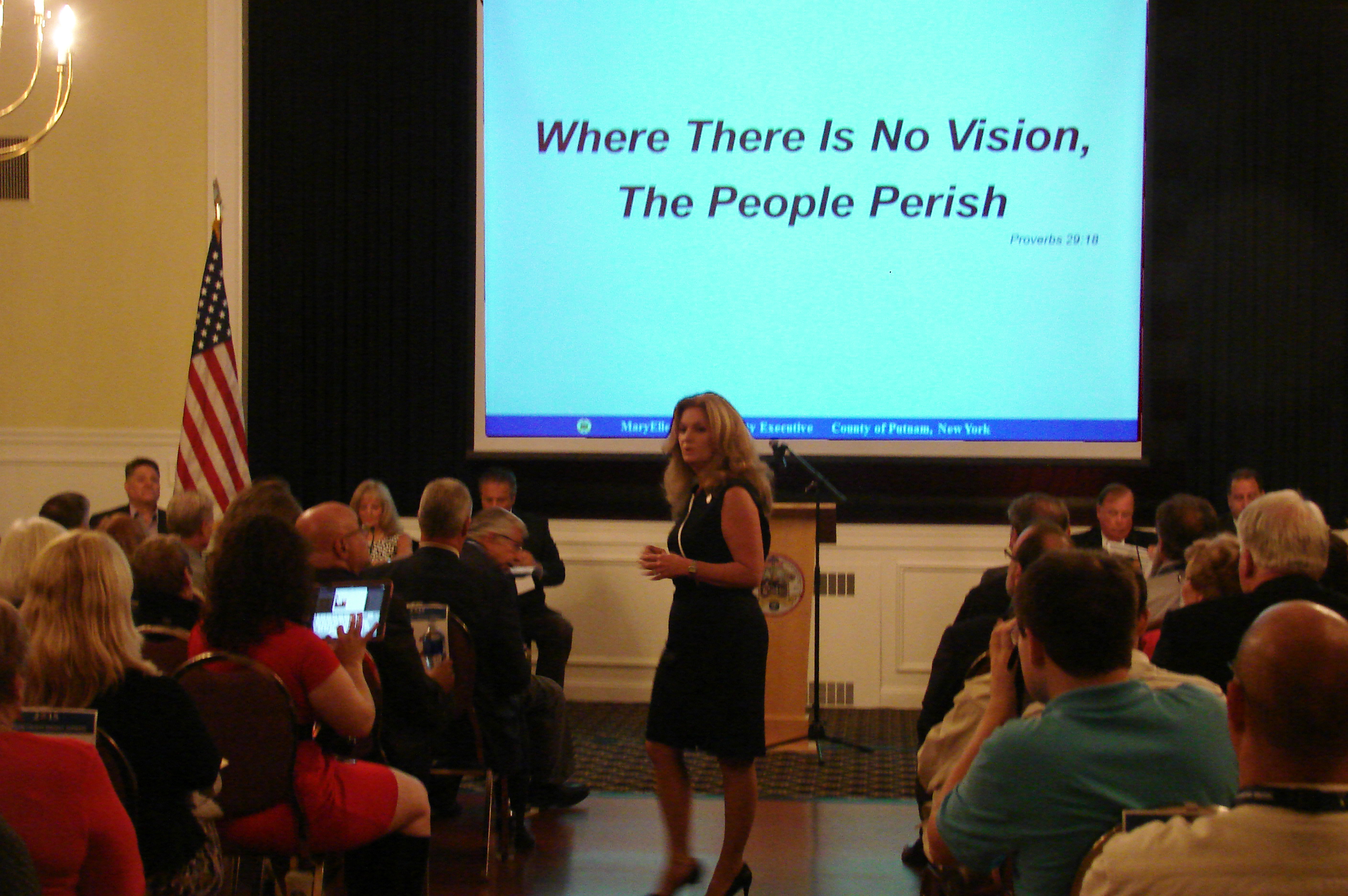 County Executive MaryEllen Odell unveiled her proposed $145.4 million budget for 2015 and announced the county’s War on Addiction at a widely attended meeting of the County Legislature on Wednesday, Oct. 2. The 7 p.m. event was held at the Putnam County Golf Course in Mahopac.

The proposed budget is an increase of $2.5 million over the 2014 budget and with a mere 1.7 increase, comes under the tax cap. Hers is the fourth consecutive budget that uses less from the General Fund Surplus than the previous year. Because the proposed 2015 budget falls under the mandated tax cap, the average Putnam County homeowner will see a property tax increase of only $13 in 2015 and eligible homeowners will be entitled to a refund from the state next fall.

In defining her reasons for clamping down on addiction in all its forms, Odell revealed startling statistics: heroin arrests since 2012 have increased 300 percent; 40 percent of the inmate population at the Putnam County Correctional Facility were arrested by the Narcotics Enforcement Unit (NEU); 42 percent of NEU arrests were heroin or opiate related in 2013 and to date in 2014, 47 percent of NEU arrests are drug related. DWI and DWAI arrests by Sheriff’s Department personnel totaled 152 in 2013; the total so far for 2014 is 101. The time expended for each arrest is approximately four hours.

“We have to be one Army on the War on Addiction,” said Odell. “The sheer cost to society due to substance abuse and addiction is staggering. It is estimated in the U.S. that 25 percent of each Medicare dollar and more than 20 percent of each Medicaid dollar is spent on addiction related illness or conditions. Our businesses lose manpower due to lost work days, and our police lose over 600 hours that could be spent providing neighborhood security or responding to emergency calls because they have to deal with so many DWI and DWAI arrests. We have to bring these numbers down,” she said.

Odell’s budget proposes adding two new deputies and an additional investigator position to the County Sheriff’s Office in order to maintain a stronger presence on the western side of Putnam where a drug trafficking corridor runs from Peekskill to Poughkeepsie. Just days before Odell presented her proposed budget, the federal government designated Putnam as a High Intensity Drug Trafficking Area (HIDTA), a tag Odell was not thrilled about receiving.

“I said I was heartbroken to have this HIDTA designation, but I also have to be realistic. There is no denying that we are losing our children and young adults to drugs. It has to stop and this designation will bring with it funding and other forms of assistance that will help us on our War on Addiction,” she said.

Odell congratulated Putnam’s senior population in this, the Year of the Senior, for their social and economic contributions to the county. While Putnam has the fastest growing population of seniors in the state, they are not an inactive group. The Retired Senior Volunteer Program (RSVP) saw 530 volunteers donate almost 80,000 hours in 86 job functions for a savings to the county of almost $1.8 million.

Odell also highlighted how the county utilizes its resources as it continues to investigate Medicaid and Workers Compensation frauds, reduces the use of outside contractors, and makes use of its Alternative to Incarceration, Inmate Court Appearance and P.I.L.O.T programs, all of which have contributed to substantial savings for the count’s bottom line.

The county’s use of public/private partnerships will increase in 2015 as the county-owned Tilly Foster Farm partners with BOCES to offer Culinary Arts and Equine programs on the grounds of the199-acre property. Odell highlighted the success of the 2014 partnerships which saw a significant increase in use of the county-owned golf course not only in rounds of golf but more importantly for social events including weddings. She also thanked Jenn Maher and Bill Nulk from the Putnam County Chambers of Commerce for launching Putnam Moves Bus Advertising program which will defray the costs of the improved public transportation system within the county.