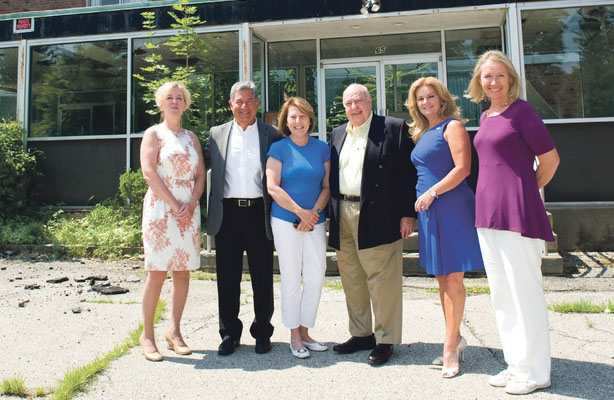 On Tuesday morning, Putnam County officials, developer Paul Guillaro and a benefactor who wants to help outfit a new senior center met at the long abandoned Butterfield Hospital to show support and a recommitment to the Philipstown seniors.

Guillaro stood outside of the old hospital with County Executive MaryEllen Odell, County Legislator Barbara Scuccimarra, Garrison residents Roger Ailes and his wife Elizabeth, publisher of the PCNR, and Putnam County Director of Tourism Libby Pataki. All expressed a renewed commitment, first made more than a year ago to the senior community, to finally bring a new senior center to pass. Mr. Ailes has committed $500,000 to help outfit and furnish the new senior center, and County Executive Odell has pledged to bring county services, including for seniors, to the development.

Guillaro said that the planned municipal building will be the first one constructed, so that a senior center can become a reality.

Roger Ailes said that he continued to want to see upgraded facilities for Philipstown seniors. “At this point, it looks like Butterfield is moving forward and I’m recommitting my money to the Philipstown seniors to build them a senior center. There are people who will continue to try to derail it, but I think the citizens of this community know what is in their best interest and want Mr. Guillaro to proceed and get it built, “ said Ailes.

Odell said that she was not only talking about supporting a senior center, but also bringing much needed county services to the western part of Putnam County. She observed that the seniors have been enjoying the Friendship nutrition center at the American Legion, but added, “It’s a very aged building and we are concerned for their safety and their well being.” She said that because of the generosity of the Ailes’ family donation, “We can realize a beautiful, state-of-the-art facility right here on the Butterfield campus, as long as this project keeps moving.”

Succimarra, who has been an outspoken advocate for the development, said that she feels that other county legislators are on board with the project. “They see the importance of bringing services to the west side of the county, which has been underserved for many, many years,” she said.

Pataki said she could also see a new tourism department office at the site, which could help her promote Philipstown and bring in much needed tourists dollars to the community.

Along the way, the Butterfield project has certainly seen its share of bumps. Former Trustee Matt Francisco and Hawkins sought at various points to derail the project or intensify scrutiny to the point it could not move ahead. The project started to gain momentum when Cold Spring residents voted Francisco out of office. In addition, four new planners were added to the Planning Board and the momentum shifted to put the project back on track. Guillaro is currently before the planners and will soon land at the Historic District Review Board.