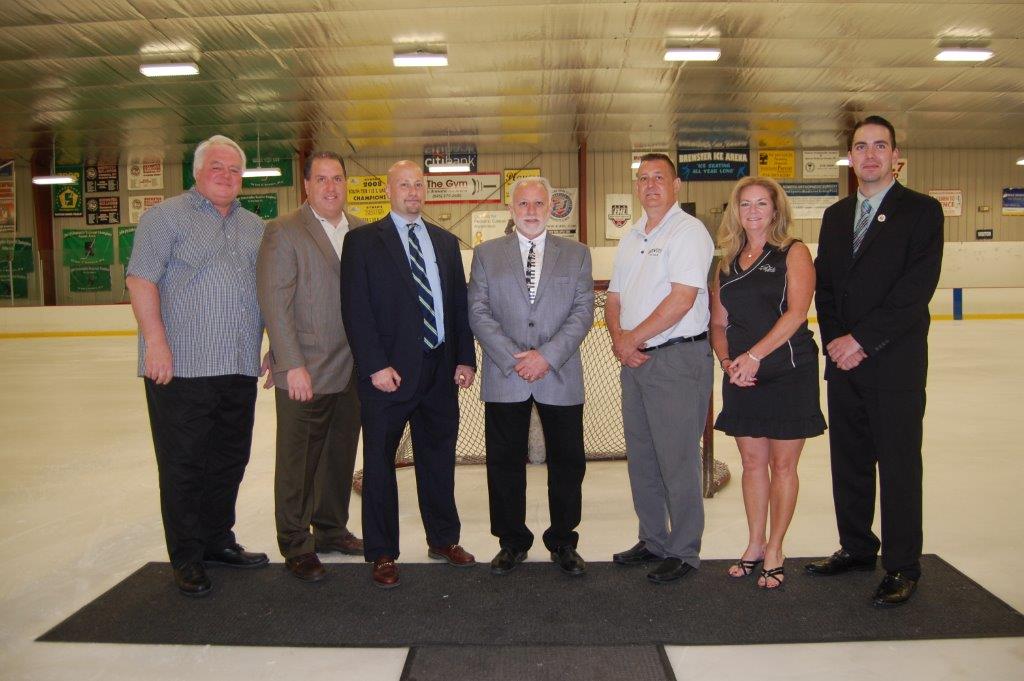 The Federal Hockey League (FHL) announced that a new team, called the Stateline Whalers, will be playing the 2015-16 hockey season out of the Brewster Ice Arena, located in Brewster, New York. The team is owned by long-time minor league hockey operator Barry Soskin, a Chicago native.

“Brewster is a fantastic location for our league,” said Sorkin. “We wanted to keep a team in the New York-Connecticut market and this fits our footprint.  This is a hockey community and the fans have given us a great response.”

The Brewster Ice Arena (BIA) has seating for 850 fans with additional second floor VIP areas to take the capacity to 1,000.  Built in 1997, the BIA features four sheets of ice which also includes one outdoor rink.  On the second floor of the venue, fans will enjoy the Players Club Restaurant & Sports Bar and banquet facility which offers a full menu and beverage selection.

The FHL has worked with BIA owner and operator Steve Santini to formulate a plan for the future.

“We are committed to this team and are eagerly looking forward to this season and hosting a professional hockey league,” said Santini. “We are in the process of exploring future seating options and envision an increase in the seating capacity with approval from the town.”

FHL Commissioner Don Kirnan is looking forward to the leagues expansion into Brewster.

“I have known Steve Santini and his for family for a number of years,” said Kirnan.  “He is a fantastic operator.  This is a hockey first facility which we love.  We have found a jewel in Putnam County.”

County officials think that having the Stateline Whalers call Putnam home will be a great economic opportunity for the region.

“Having the Stateline Whalers here in Brewster is very exciting for Putnam County and the benefits of a minor league team in the area are priceless.” said Putnam County Executive MaryEllen Odell.  “It will boost economic development, create jobs, increase tourism in the county and heighten an already strong sense of community.”

Leg. Joseph Castellano, who serves Putnam County Legislative District 7, which includes Brewster Ice Arena, is thrilled to see how much the ice arena continues to grow and meet the needs of the communities surrounding it.

“As a neighbor, it has been great to watch Brewster Ice Arena expand from a one-rink sporting facility to a four-rink ice arena that serves hockey players and ice skaters from not just Putnam but, northern Westchester, southern Dutchess and western Connecticut,” said Castellano. “With BIA hosting the home games of the Stateline Whalers, hockey fans now have an opportunity to see professional games at affordable prices right here in Brewster.”

NY State Senator Terrence Murphy, who represents Brewster as part of the NYS 40th Senate District, already is a regular patron of BIA, is looking forward to taking his family to see the Stateline Whalers play.

“Putnam County just scored a big win by having the Stateline Whalers call Brewster home,” said Murphy.  “I know my kids, who learned how to play hockey at the Brewster Ice Arena, can’t wait for the first game.  This announcement only adds to Putnam County’s resume as a great place to live, work and raise a family.  I applaud everyone’s efforts in this endeavor and look forward to the Whalers future success right here in our backyard.”

With hockey being such a popular sport for both athletes and fans in the region, Deputy Director of Putnam County Tourism Frank Smith sees the Stateline Whalers laying its roots down in Brewster as catalyst to increased tourism to the county.

“Having a professional sports team is an incredible opportunity for Putnam County,” said Smith. “Fans from Connecticut, northern Westchester and southern Dutchess will be traveling to Brewster to watch the games and will hopefully discover some of the other activities Putnam County has to offer. Brewster Ice Arena is already one of the top attractions in the county. Being the home rink of the Stateline Whalers will now make it one of the major destinations of the lower Hudson Valley and western Connecticut regions.”

With the team coming to Brewster, it crossed into the existing territorial rights for the Danbury Whalers.

“The official position on the Danbury Whalers is that the team is a member of the Federal Hockey League in good standing that is on in-active status,” said Commissioner Don Kirnan. “They are at an impasse with their landlord the Danbury Ice Arena.  In an effort to continue their commitment to the Federal Hockey League, the team has waived their territorial and naming rights to the Brewster franchise.  We back and support our league member and partners.”

The Whalers will play a 56-game schedule as part of the Federal Hockey League’s sixth season of operation.

In the coming weeks the team will be releasing information on ticket packages and pricing, fundraising opportunities, sponsorship, and the head coach.

Fans can sign up for the team newsletter at www.statelinewhalers.com

Entering its sixth season of operation, the Federal Hockey League is one of five professional leagues in the United States.  The FHL has promoted over 200 players to various other professional leagues including the AHL, ECHL, CHL, & European Leagues.  The FHL currently has teams located in Berlin (NH), Danbury (CT), Dayton (OH), Watertown (NY), Danville (IL), Berkshire (MA), and Port Huron (MI).  Last season over 100,000 fans watched FHL action live.  Check out the league at www.federalhockey.com