Public 9/11 Remembrance Ceremonies to be held in Putnam 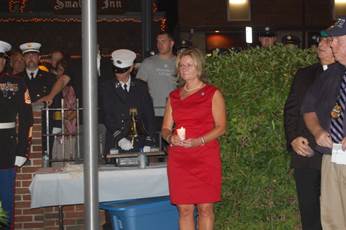 CARMEL, N.Y. – It has been 14 years since the heinous acts of terrorism in New York City, Pennsylvania and in Washington D.C. occurred on September 11, 2001, which will forever be known as 9/11. To remember the eight Putnam residents who were among the thousands killed as well as the their families and the first responders and recovery workers who have suffered sickness as a result of the World Trade Center attacks, Putnam County Executive MaryEllen Odell will be participating in a number of 9/11 ceremonies on Friday, Sept. 11.

911memorialcarmelmeo“In our hearts it feels like it was yesterday,” said Odell. “The world forever changed after the horrific terrorist attacks that killed thousands at the World Trade Center, Pentagon and in a Pennsylvania field. It is important to remember those that died on Sept. 11, 2001, support those who suffered a loss and thank those who continue to serve us.”

On Friday, Sept. 11, 2015 at 8:44 a.m., Jack Gress of Brewster will be raising the American flag and lowering it to half-staff as a mark of respect to those who died on 9/11 at Someday Retirement Community, located at 2 Stone Ridge Road in Brewster. There will be a moment of silence at 8:46 a.m., the time the first plane flew into the World Trade Center, to honor the innocent individuals from around the world who lost their lives as a result of the 9/11 terrorist attacks. People are asked to arrive by 8:30 a.m.

911memorialcarmelThe Brewster Elks Club, located at 1430 Route 22 at the corner of at Milltown Road in Brewster, will be holding its annual 9/11 remembrance ceremony at 6 p.m.

Then at 7 p.m., there will be a 9/11 Mass at St. James the Apostle Church in Carmel, followed by a candlelight procession to Cornerstone Park on the corner of Route 52 and Fair Street in Carmel.

At Cornerstone Park, the Stephen P Driscoll Memorial Lodge of the Fraternal Order of Police will host a solemn service at 8 p.m. Putnam County’s eight heroes murdered by terrorists on 9/11 will be honored during the ceremony.

The public is invited to attend all of the events.