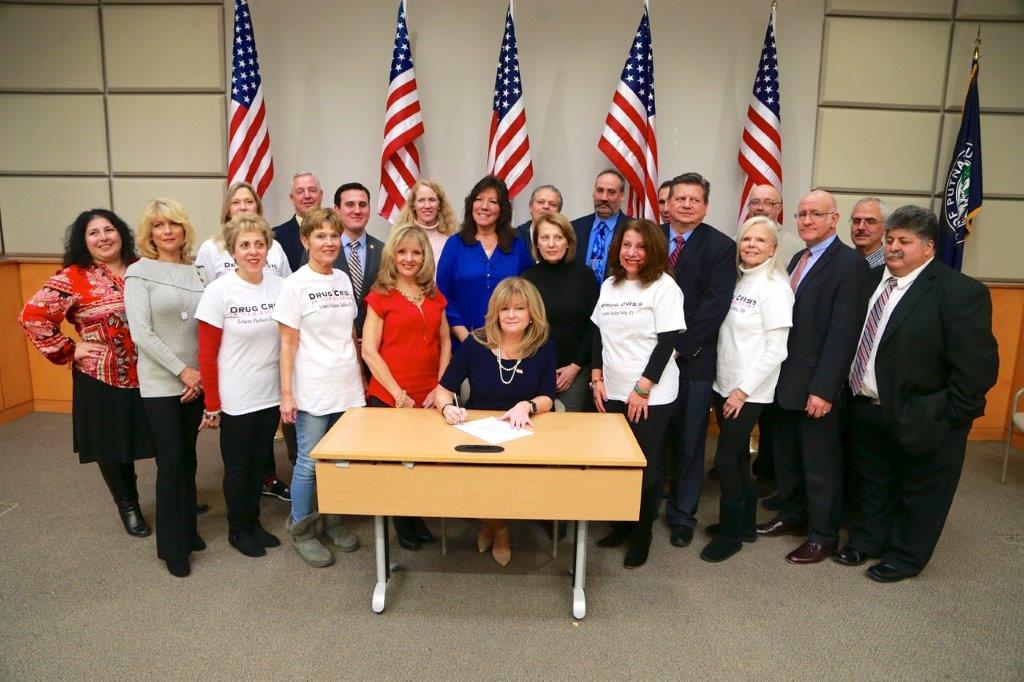 CARMEL, NY – Surrounded by county officials, state representatives and local community leaders, Putnam County Executive MaryEllen Odell signed the resolution directing the county government to join the New York Opioid Cost Recovery litigation, on Monday, Dec. 18 at the County’s Bureau of Emergency Services. The lawsuit is against the pharmaceutical companies and distributors for fraudulent and negligent practices they engaged in, which caused immeasurable harm to residents and taxpayers. The resolution was passed by the Putnam County Legislature last month, 8-0, with one legislator absent.

“Heroin and opioid use is a major public health and safety crisis and the costs to our community is not limited to pain and suffering of the individuals and families impacted,” said Odell. “Unfortunately, there is also a taxpayer impact including massive resources used in county public health, law enforcement, court system, mental health and social services, coroner and medical examiner and many other programs and services. The County has significant damages and we will aggressively pursue those damages through litigation.”

The goal of the litigation would be to fully compensate Putnam County for unnecessary cost incurred because of prescription opioid abuse, including workplace costs relative to loss of productivity, healthcare costs such as abuse treatment and criminal justice costs.

Heroin and opiates are now the leading cause of accidental death in New York State, outnumbering homicides. In fact, in the past three years, over 40 fatal opioid overdoses were reported in Putnam County.

The number of drug-related arrests have gone up also from 339 in 2016 to so far 456 in 2017, according to the Putnam County District Attorney’s Office.

“This crisis is only growing and as government officials, we need to do all we can to combat the violence and unnecessary death attributed to this crisis,” said Odell. “In order to fight this growing epidemic, we must improve prevention, increase access to treatment, expand recovery options, expand resources for law enforcement and battle with the root of the problem—the pharmaceutical companies and distributors.”

The connection between prescription drugs and heroin stems from the abuse of prescription opioid pain killers, and is directly related to heroin’s growth in popularity with young people: these pills are the doorway to heroin abuse.

“Filing a lawsuit also allows the County to be in the driver’s seat and control its own destiny,” added Odell. “We have the power to determine whether to accept a settlement and how any recovery would be distributed, not the State.”

“By joining forces with several counties across the state, we are holding those companies accountable,” said Chairwoman Ginny Nacerino, Putnam County Legislature. “I believe everyone has known someone, directly or indirectly, affected by the devastation of opioids. It is important to raise awareness to the origin, and it is time for those companies to take responsibility. Unfortunately, the damage created by such negligence and depravity is irreversible, resulting in both pain and suffering and the loss of many lives. It is truly shameful.”

Senator Terrence Murphy said, “I applaud the actions of County Executive Odell in joining this lawsuit. She had always stood in the forefront in the fight against heroin. This lawsuit reaffirms her commitment to holding big pharmaceutical companies accountable for ruining our communities and pushing their poison on our families.”

“The heroin and opioid epidemic has devastated far too many families here in our community and despite the best efforts of the local community and the state, the overdose numbers continue to climb” said Senator Sue Serino, a member of the State’s Task Force on Heroin and Opioids. “We need to be exhausting all options to tackle this epidemic head-on and that’s what this effort is all about. I thank County Executive Odell for continuing to make this issue a top priority.”

Assemblyman Kevin Byrne said, “With this resolution, Putnam County is taking an important step by joining others in attacking the root cause of this opioid epidemic.  Big Pharma must be held accountable for its role in the marketing and distribution of these opioid pain medications. I thank the Putnam County Executive and the Putnam County Legislature for their strong stand on this issue.”

“As we all know, on a daily basis, heroin and other dangerous and illegal drugs are being smuggled into our country, distributed onto our streets, and are killing our loved ones,” said Putnam County District Attorney Robert Tendy. “Surprisingly, over the past 10 to 20 years, there has been an effort on behalf of trained professionals in our own country to encourage our citizens to take legal prescription drugs at an alarmingly dangerous rate, resulting in tens of thousands of people, our children, siblings, and parents, becoming addicted and dying.  Holding the pharmaceutical companies responsible for their part in the Opioid epidemic in America is one very important step in the process to solving this national crisis.”

Stephen J. Acquario, executive director, NYS Association of Counties, said, “County Executive MaryEllen Odell is leading the way to combat the spreading of the opioid crisis facing our state.  By bringing legal action, this lawsuit will bring change in opioid distribution and manufacturer responsibility.  This is another important step to save lives, protect our communities and bring about needed reform.”

“It is about time that we hold these companies culpable,” said Susan Salomone, executive director and co-founder of Drug Crisis in Our Backyard. “Families are spending their retirement funds trying to get people treatment. The pharmaceutical manufacturers and distributors need to be responsible.”

Megan Castellano, executive director of the Mental Health Association of Putnam County, said. “As co-chair of the Suicide Prevention Task Force we are proud to support this initiative and we are happy that the county is taking the lead to further our efforts to save lives by reducing access to lethal means, particularly prescription drugs.”