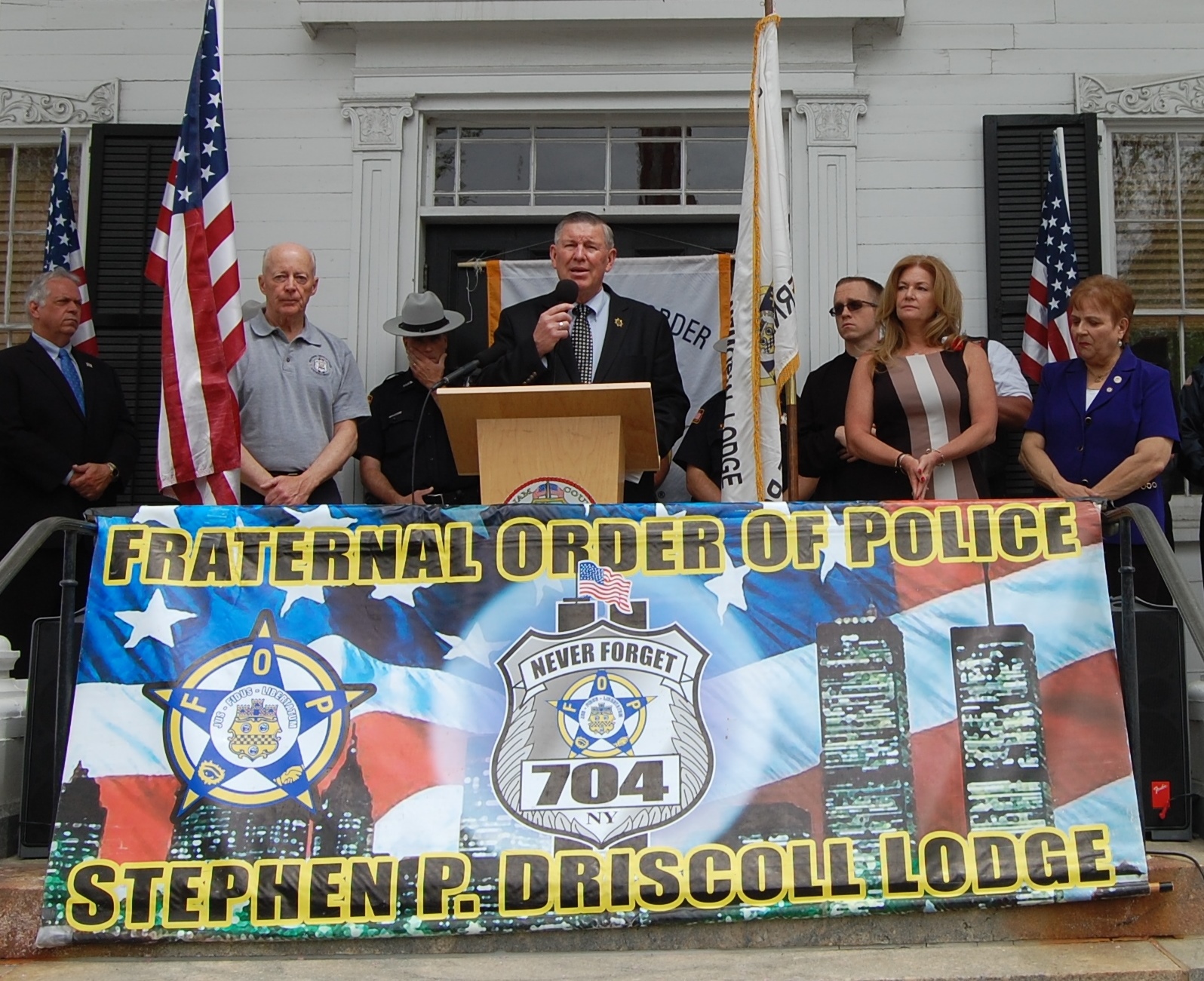 Putnam County Government in cooperation with the Fraternal Order of Police Stephen P. Driscoll Memorial Lodge 704 (FOP) held a vigil service on the steps of the Historic Court House in Carmel on Wednesday afternoon, May 6, to honor the memory of fallen New York Police Department Officer Brian Moore.

Moore, a 25-year-old plainclothes officer who worked for the 105th Precinct, died on Monday, May 4 after being shot in the line of duty on Saturday in Queens. He was on the force for five years and made 150 arrests.

Putnam Sheriff Donald B. Smith served as the service’s master of ceremonies and an invocation was given by Father Matthew MacDonald of St. James the Apostle Church in Carmel.

“It is very important that we honor the memories of all those who have lost their lives in making the ultimate sacrifice in service to the people of the United States of America in protecting our way of life and all the freedoms we enjoy,” said Sheriff Smith. “Our hearts go out to all of their family members.  We want them to know that we are truly a grateful nation and we will always remember their service and sacrifice.”

FOP President Kevin Sheil noted that Moore’s death is part of an unfortunately growing trend that should put active officers on alert.

“Officer Moore was a good cop who loved working for the New York Police Department,” said Sheil. “He was shot during an anti-crime patrol by an unrighteous person. It is becoming far too common around the county. Police officers have to be more vigilant than they ever before.”

“Most people do not know that in between 120 and 160 police officers dine in the line of duty every year,” said McCormack. “Thank you to Putnam County for honoring the law enforcement community and the service they provide. This recognition and gratitude is needed more than ever in light of current events.”

“Putnam County is made up of first responders – career and volunteer, and we stand united with the men and women in blue in the NYPD and throughout the country,” Odell said. “Our thoughts and prayers go out to the Moore family as well as the families, friends and neighbors of all the officers who made the ultimate sacrifice.”

“Next week is National Police Week,” added Odell. “We planned on recognizing Police Week by illuminating the Historic Court House in blue next week, but in light of the recent death of Officer Moore, we will be moving the start of the blue-lit court house tonight.”

Police Week runs May 10-17.  In 1962, President John F. Kennedy signed a proclamation which designated May 15 as Peace Officers Memorial Day and the week in which that date falls as Police Week. Communities join tens of thousands of law enforcement officers from around the world to honor those that have paid the ultimate sacrifice.