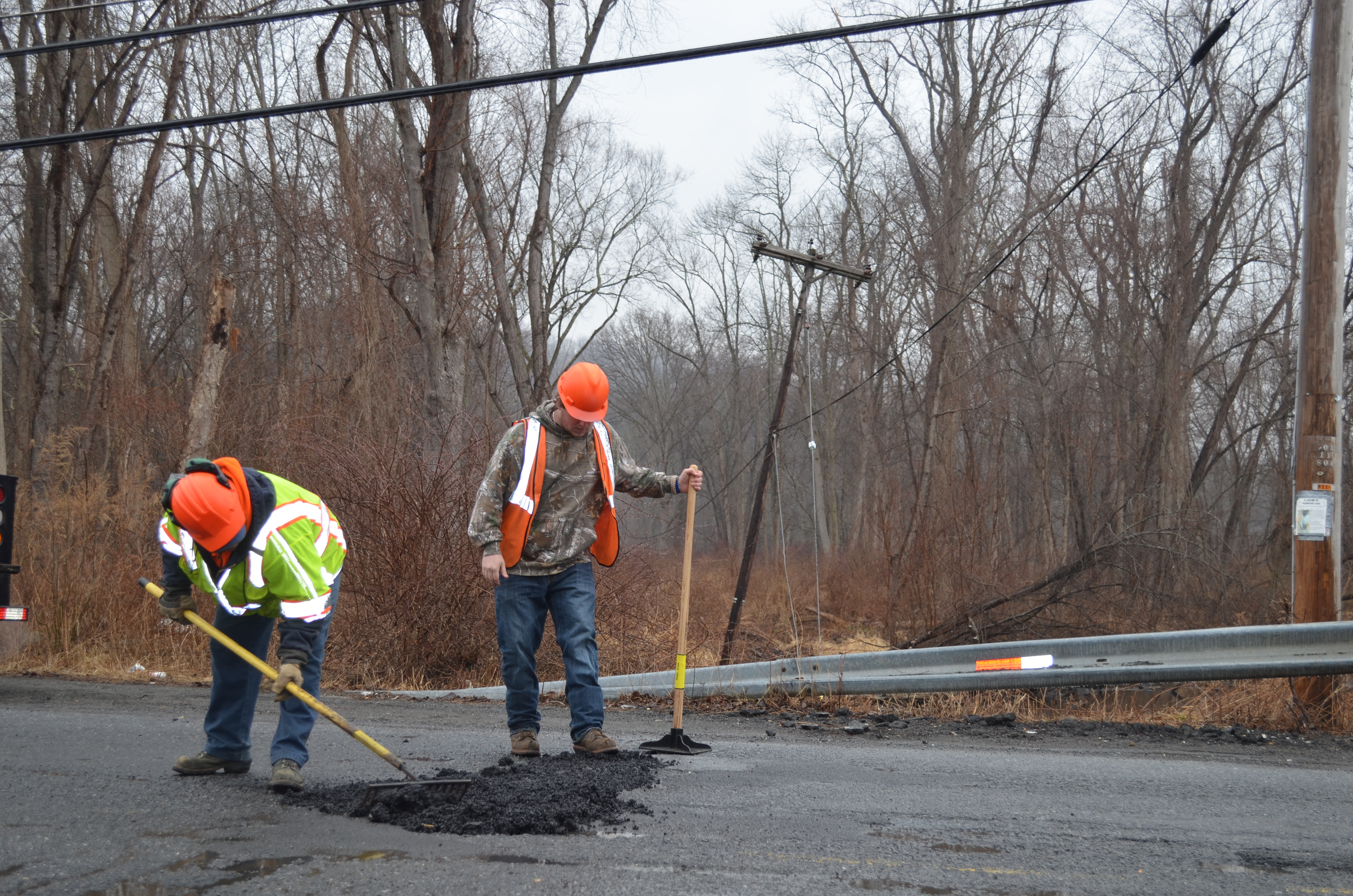 On Friday, March 28th at a kick-off meeting with the Highway Superintendents for the majority of the Towns and Villages in Putnam County; County Executive Odell, Putnam County Highway and Facility Commissioner and various key elected officials launched “Operation Smooth Streets,” an aggressive and innovative program to improve the quality of roadways in Putnam County.

“Our roads took a terrible beating this winter,” said Odell. “The intense freeze and then the thaw on top of the amount of salt that had to be applied to the streets left many roadways damaged. We have launched Operation Smooth Streets to not only provide our residents a one-stop place to notify local municipalities about road damage but to also allow a method for the county, town and village highway departments to gather and share information that can be used to determine underlying problems and collectively go after funding.”

Residents can now report street defects, such as potholes, drainage issues, cave-ins, sinkholes or cracking, through the county website at www.putnamcountyny.gov/potholes or by emailing potholes.putnam@putnamcountyny.gov. Using the easy form the public can tell the officials where a problem is located. The form will then be emailed out to the appropriate agency and the person who submitted the issue will be included in the communication.

“Constituents don’t care if a road is a state, county or local road, they just want it fixed,” said Southeast Councilwoman Lynn Eckardt, who attended a meeting hosted by the county on the new initiative. “By being included in the emails with the highway departments the residents will be able to know what agency is taking care of the problem. It provides accountability for the highway departments and the individual will have input and be aware of the process.”

In addition to the forms submitted by the public, the highway departments will also be tracking the work that is being done by their agencies and sharing the information with the county.

“The research I have done on the issue has shown me that the cities that have been most productive in their approach toward fixing the issues have taken a collective approach, said Odell who is a full voting member of the NYMTC (New York Metropolitan Transportation Council). “I think for each of the municipalities to be talking about their road repairs is a whisper, but if they join together our voices are much stronger that is why we launched Operation Smooth Streets.”

As a collective voice the county and local municipalities can lobby state and federal representative for infrastructure dollars including a portion of the $40 million allocated in the New York State 2014 – 2015 budget agreement to help fix potholes.

“I commend Putnam County for doing this,“ said Ed Brancati, district director of Congressman Sean Patrick Maloney, “To have one clearinghouse to identify where the problem spots are in Putnam and to be able to identify the priority areas on that list is a help.  One of the things we are also talking about is pulling together all of our state legislators throughout the 18th congressional district to say here is our list of priorities, we need to you argue collectively in Albany as one voice.”

Brancati noted that the Buffalo region and Long Island have been very successful in getting infrastructure dollars because their representatives come together as a united voice.

“Certainly the county executive having a voice and a vote on NYMIC is crucial, because the way they operate they tend to be more focused downstate and in the city,” Brancati added.” So having a strong voice for the county will be a big help.”

Pena, who will be leading the efforts for the county, thinks Operation Smooth Streets will ultimately improve the quality if the roads countywide.

“County Executive Odell has been tremendously supportive of the Putnam County Highway initiatives and our efforts to improve the condition of county roads, said Pena. “She has expanded her support of roads with Operations Smooth Streets, where the county now has a web-based way to report road issues. In addition, the county executive has brought members from state and towns to meet with our representatives to advocate for additional funding needed to maintain our infrastructure”.

He added. “It is extremely important that we, as a community, work together to have county wide visibility of infrastructure issues and advocate for additional funding together.  We cannot lose focus of our deteriorating infrastructure.”

“The cost of paving is going up and we need road money,” said Southeast Highway Superintendent Michael Bruen. “In order to properly take care of our roads and highways you need to be proactive. This plan that is being spearheaded by County Executive MaryEllen Odell could really assist us not only now but for our long term success.”

“This is a good idea, said Putnam Valley Town Supervisor Bob Tendy. “There is no downside to this.”