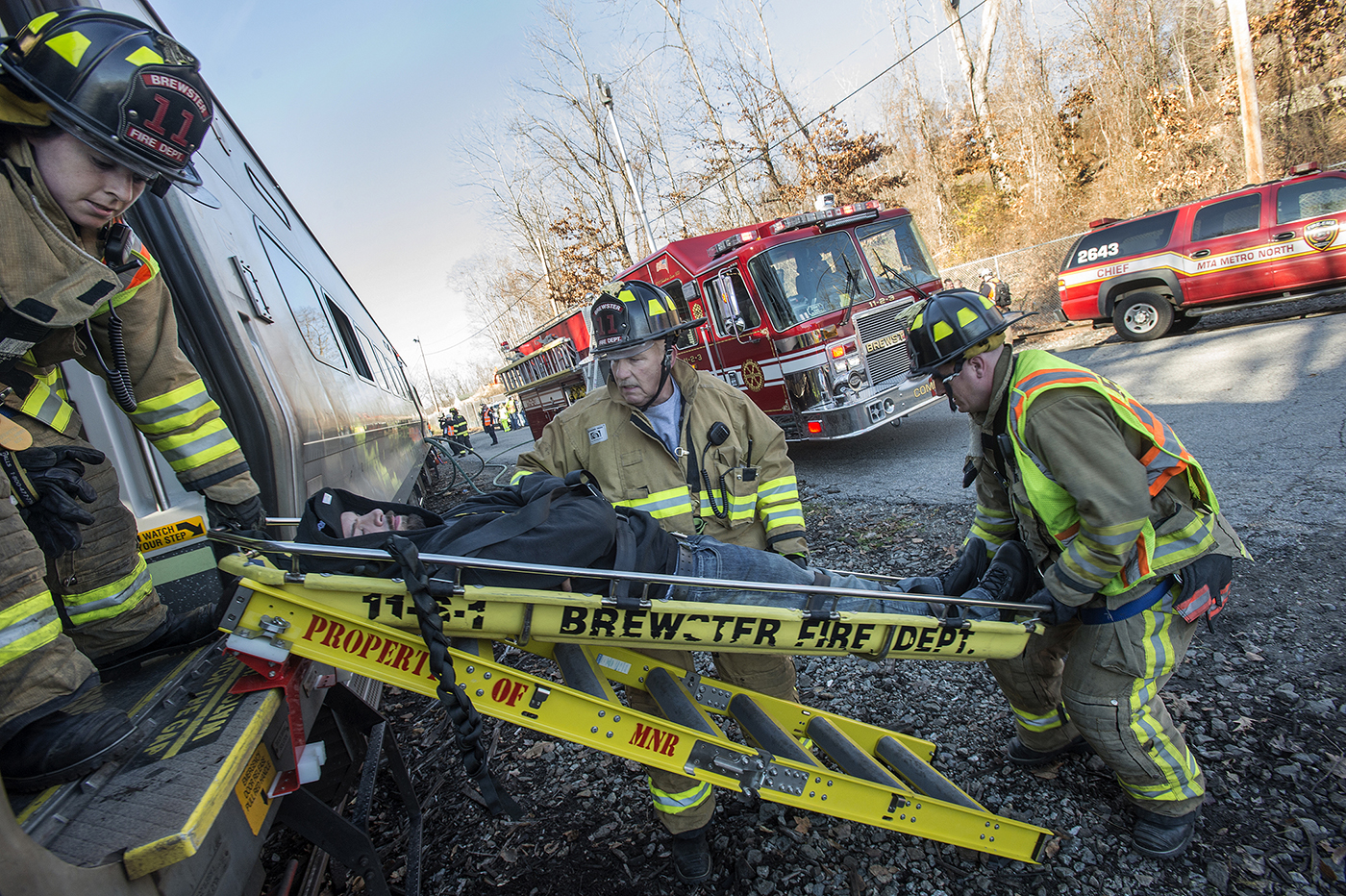 CARMEL, N.Y. – County Executive MaryEllen Odell observed the full-scale joint emergency exercise between the first responders of Putnam County and the MTA Metro-North Railroad that was held on Saturday, Nov. 21 at the Metro-North Railroad Brewster Yard. The Brewster Fire Department was the host department of the event.

“We never want to see the scenarios happen in real life, but it is good to know that the MTA Metro-North Railroad and our first responders are prepared with the tools and knowledge to handle these types of incidents,” Odell said. “Seeing everyone in action reaffirmed my confidence in the ability of the first responders who are committed to keeping the residents of Putnam County safe.”

In the drill scenario, a passenger train traveling north along Metro-North Railroad’s Harlem line encountered a motor vehicle impeding the right-of-way. The train engaged its emergency brakes, but was unable to stop in time. Passengers of the train in the front two cars sustained injuries as a result of the impact.

“Ensuring the safety and security of our customers, employees, and the public at large is the most important thing we do,” said Metro-North President Joseph Giulietti. “We strive to prevent accidents from taking place, but nevertheless, part of being safe means being ready to act quickly and carefully in the event that something does go wrong. Our exercise in Brewster helped us to do that and we appreciate the assistance of County Executive Odell, Mayor [James] Schoenig and all of the teams of first responders who participated with us in the exercise.”

The Metro-North staff and the first responders went through the response and recovery actions of the scenario. The areas of consideration were: critical transportation, operational coordination, mass search and rescue operations, public health and medical services, on-scene security, protection, and law enforcement and operational communication. The scenario included Metro-North employees, first responders and other participants who acted as victims or bystanders.

rom drills like this one,” said Brewster Fire Chief Tom Leather. “We are always looking to hold exercises like this one with the large corporations within Putnam’s borders. It allows our volunteers an opportunity to practice the skills they need in a safe environment, the departments gain inside information from the corporations about the emergency plans they have created and we develop working relationships with the employees of the corporations. The experience is truly valuable.”

The goal of the exercise was to ensure the participants familiarization with Metro-North’s Passenger Train Emergency Plan (PTEP), emergency response procedures, and equipment. In addition, the players were able to demonstrate incident management and coordination between the Metro-North entities, local dispatch centers and on-scene Unified Command during a complex incident. It also provided an opportunity to evaluate the rail-based search and rescue operations, management of mass casualty incident (MCI) response capabilities, including patient management and tracking, the ability to maintain a secure perimeter and facilitate crowd control and Metro-North’s and local first responders’ ability to address passengers with disabilities during emergencies.

“The value of an exercise like this is immeasurable,” said Putnam County Commissioner of the Bureau of Emergency Services Anthony Sutton. “Drills such as this put first responders together in a setting where they can observe and learn each other’s capabilities and tactics. As a first responder, you do not want to meet the members of other services for the first time at an actual crash. My hat goes off to the organizations and individuals that planned, hosted and participated in this opportunity to practice in a very realistic scenario. Putnam’s first responders learned many lessons and best practices today. Now have this learning experience to draw on should they someday face a real emergency of this nature.”