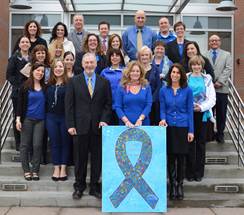 Child abuse is a national tragedy. One in seven girls and one in 25 boys will be sexually abused by the age of 18. According to the U.S. Department of Health and Human Services Administration on Children & Families, in 2011 alone, an estimated 1,570 children died from abuse and neglect, and in 2013, over 17,000 children were served at a Child Advocacy Center (CAC) in New York State alone.

“We recognize Child Abuse Awareness month to promote the issue around the country, not just the state or around the county,” said Commissioner of Social Services Mike Piazza. “Very often we see things that happen in New York City and say ‘How could a parent do that to child?’ We had 762 reports of child abuse last year in Putnam County alone. Not all of them were founded, but they were all investigated. Our concern is the safety of children and that is why bringing awareness to child abuse is so important.”

As part of the planned activities for the month the county’s Child Advocacy Center held a workshop “Protecting Your Child: Lessons Learned from Sex Offenders” on Friday at the TOPS Building on the Donald B. Smith Campus in Carmel.

“Everyone has the ability and responsibility to prevent child abuse,” said Marla Behler, Program Coordinator of the CAC. “We need to become more educated about how to recognize the signs, how to respond and how to intervene. The topic of child abuse will be at the forefront of national discussions during April and we hope that everyone will take an interest, as light is shed on this issue.”

Last year, the CAC officially implemented the use collaborative investigations and digitally recording the interviews with the victims. Working in tandem with the District Attorney’s Office and the Sheriff’s Office as well as other local law enforcement agencies, the CAC workers were able to collect the information needed from the victims without having to have the children repeat their stories over and over again to different strangers. In addition to providing a more welcoming environment for the child-aged victims, the tactic streamlined the process making it more efficient and effective.

“Child abuse is not something we as a society can turn a blind eye too, said County Executive MaryEllen Odell. “As the county executive, I know one of the most important roles of government is to protect those who cannot protect themselves. I am so proud of the strides the Putnam County Child Advocacy Center has made in the past three years in generating awareness to the epidemic of child abuse in the community, providing training to further educate the investigators, social workers and others in identifying possible victims and predators and mostly for making the experience of reporting the abuse less traumatic for the victims and providing them resources to help in their recovery. Their work in cooperation with the Department of Social Services, Youth Bureau, District Attorney’s Office and Sheriff’s Office has helped more children live in a safer environment.”

This year, a female investigator was added through the District Attorney’s office to assist with the child abuse cases to provide children who may have been abused by a man the opportunity to speak with female law enforcement officer.

To cap off the month’s activities the CAC will hold their 9th annual Children’s Expo & Public Safety Fair at the Donald B, Smith Campus on Saturday, April 26. The event is free and open to the public.