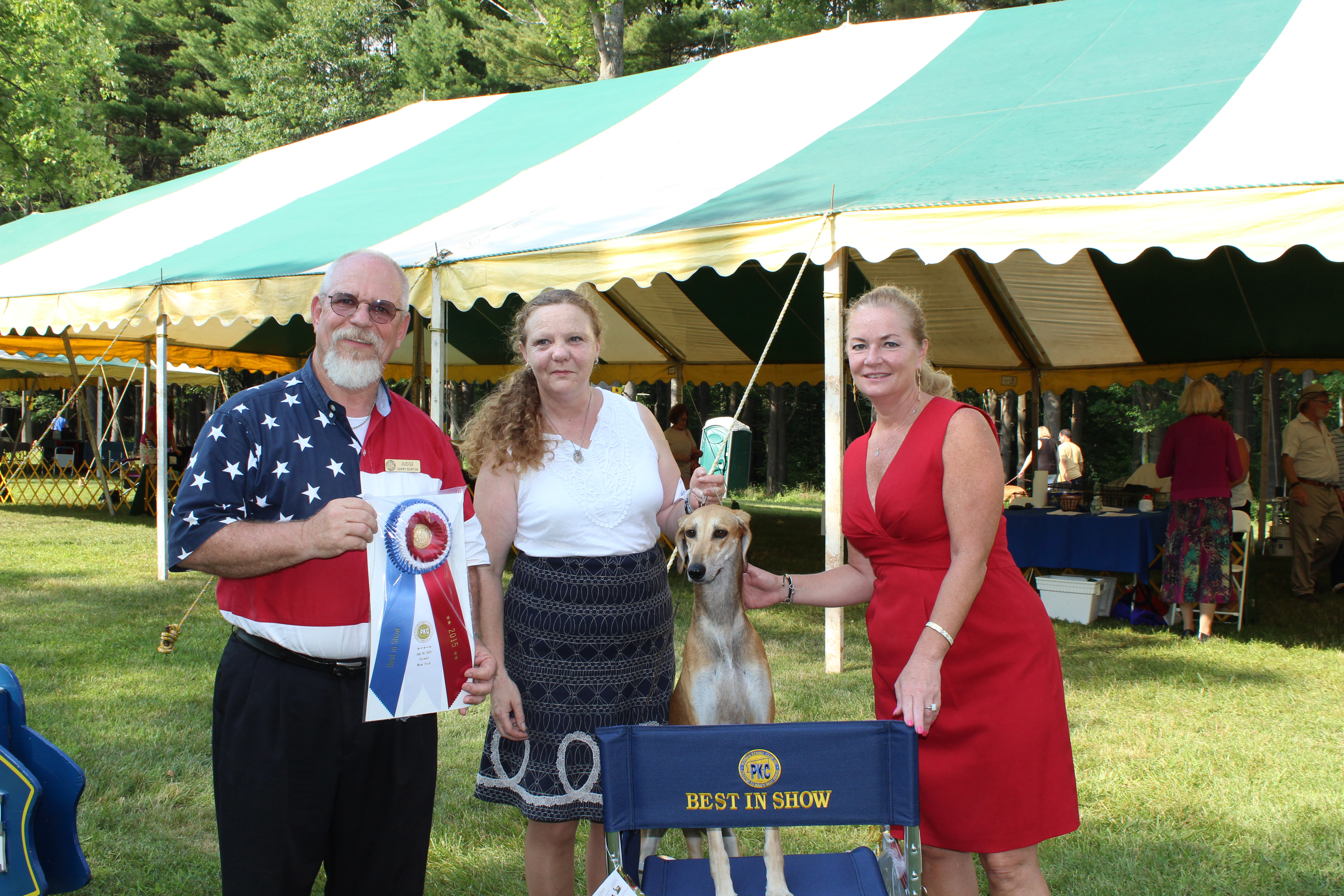 CARMEL , N.Y.  – Putnam County Veterans Memorial Park is known for many things. It hosts the annual 4-H Fair and the Daniel Nimham Pow Wow and is home to the Putnam County Veterans and Military Museum as well as related military artifacts and monuments. It may now be known to those in the canine competition world as one of the best venues to host a dog show.

Hundreds of dogs from all over the East Coast and Canada competed to be named “Best in Show” at Veterans Memorial Park in Kent on Friday and Saturday, July 17 and 18, at the Putnam Kennel Club’s All Breed American Kennel Club Show. It was the first time the park was used by PKC which previously held its annual dog shows in Stormville and Pound Ridge. The Hudson River Valley Hound Association also held a hound-only show at the park on Sunday, July 19.

“We are ecstatic about how well the park worked out as a venue,” said Barbara Pessina of Putnam Valley, who is president of the Putnam Kennel Club. “We host our annual picnic here at Veterans Memorial Park and Chris Ruthen, [director of the Putnam County Parks and Recreation Department], suggested we consider hosting our dog shows here as well. I am so glad he did. Everyone has been talking about how great the site has worked out. There was plenty of shade to keep the dogs cool and just as much room for the RVs that many of the people travel in. We could not be happier.”

Garry Newtown of Texas, a seasoned dog show judge who travels all over the country, commended the location choice.

“The Putnam County Veterans Memorial Park is one of the best site in the country to hold a dog show event,” said Newtown. “The shade provided comfort for the dogs and the grounds allowed space to showcase the canines’ movement. It was a pleasure and honor to judge there.”

The Friday show had about 600 dogs entered. On Saturday there were an estimated 700 dogs entered. An additional 400 hounds were entered in the Sunday show. Joining the dogs on the road are typically the owners, handlers and groomers. Hundreds of spectators also came to see the shows.

“The PKC dog shows are incredible opportunities for so many people from outside of Putnam to see how beautiful our county is and the things we have to offer,” said County Executive MaryEllen Odell. “We are fortunate that people are talking and word is spreading. Putnam is in its primetime. Our parks, Veterans Memorial, the golf course and Tilly Foster Farm, are all becoming regional destinations. Promoting use of these county resources is both fiscally and socially beneficial to Putnam residents.”

Often visitors discover Putnam County for the first time by attending an event hosted by a local organization.

“I am amazed at how many visitors from outside of Putnam County came to support the dog show,” said Interim Director of Tourism Frank Smith. “These are people that dined and shopped in the area. I hope that Putnam County’s beauty and hospitality will entice them to come back.”

Of the hundreds of dogs that competed in Friday’s and Saturday’s show, the top honors of “Best in Show” each day were given to GCh Takara The Time Is Now, known affectionately as Ali, a Saluki breed. Aly’s handler is Lesley Potts of Hannacroix, N.Y., and her owner is Pam Mohr of Oxford, N.J.

Photo caption: County Executive MaryEllen Odell was invited to present to Lesley Ann Potts and Ali, a Saluki bred dog,  the Best in Show award with its judge Garry Newtown.