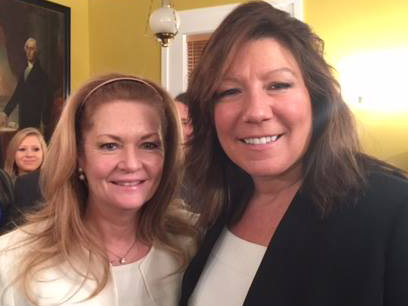 Putnam County has the fastest growing senior population in New York State, so it is only right that a state senator representing the county be appointed chairman of the Senate Committee on Aging. State Senator Sue Serino, who represents the towns of Kent, Putnam Valley and Philipstown in Putnam County as well as a portion of Dutchess County, was recently named the chairwoman of the Committee on Aging.

Serino, who has a district office located within the Putnam Valley Senior Center, will head up a critical committee charged with considering legislation that has a direct impact on New York State’s seniors.

“This is an extremely fortuitous situation for the seniors in Putnam Valley and Putnam as well as the entire state of New York,” said County Executive MaryEllen Odell.  “Putnam County has the fastest growing senior population in NYS and the fact that Senator Serino has chosen to house her district office at the Putnam Valley Senior Center, not only confirms her commitment to this important segment of our population, but it also provides the opportunity for those seniors and veterans who regularly visit our center to have easy access to Senator for resolution of any needs that they may have.”

Office for Senior Resources Director Pat Sheehy, who is the chair of the legislative committee of the New York State Association on Aging, is pleased to learn that Serino was named to the NYS Senate Aging Committee.

“Having an office within the Putnam Valley Senior Center provides the Senator first-hand knowledge of the effectiveness of the tax dollars that are spent to provide socialization, wellness programs and nutrition to so many of our seniors who would otherwise be isolated in the rural areas of our beautiful county,” said Sheehy. “The Senator will also become familiar with the importance of well operated adult daycare programs and various other programs essential to keeping our seniors healthy at home as long as possible. This is truly a perfect match!”

“I am beyond excited to have the opportunity to chair the Aging Committee,” said Serino. “It is essential that we, as lawmakers, work together on behalf of our state’s seniors and this committee will be the perfect vehicle to do just that.”

Serino continued, “Residents across New York, and in my Senate District especially, should know that I will fight tirelessly to ensure that bills passed through this committee do all that they can to empower and improve quality of life for our seniors.”

Putnam County Legislator Barbara Scuccimara, who along with Legislator William Gouldman, advocated for the Legislature to approve the lease permitting the Senate office within the county-owned senior center in Putnam Valley, believes that Serino leading the Senate Aging Committee could be truly beneficial to the county.

“There are real issues affecting the senior population,” said Scuccimara. “To know that we have someone up in Albany who can help facilitate solutions puts the county in a positive position. I look forward to actively working with Senator Serino in finding ways to make the lives of our seniors healthier and happier so they can stay in Putnam County.”

“I can’t remember the last time one of our state representatives had his or her office in Putnam Valley,” said Annabi. “It is a great privilege to have Senator Serino take notice of our community.  It is also fitting that she, as the chairwoman of the Committee on Aging, has opened her district office at the Putnam Valley Senior Center. I am honored to have been asked by the Senator to be part of her team in serving the people of Putnam Valley and Putnam County.”

In addition to chairing the Committee on Aging, Serino has also been named to the following committees: Children and Families, Education, Higher Education and Judiciary.