Southeast Remembers Castelli as it Becomes a Purple Heart Town 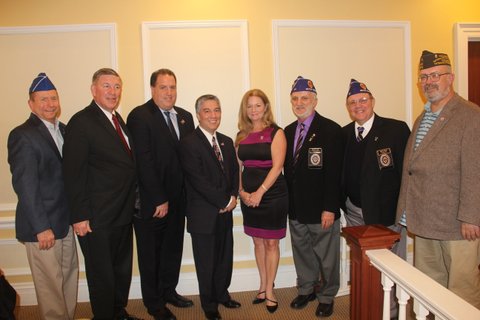 A year after one of its most ardent advocates of Veterans died, Southeast became a Purple Heart Town and remembered the efforts of Denis Castelli at a Town Board meeting on Thursday, April 23. Eugene Lang and Neil Gross of the Military Order of the Purple Heart Chapter 21 New York, Putnam County Executive MaryEllen Odell and other elected officials participated in the ceremony.

Castelli, who died on April 19, 2014, served during the Vietnam War in the 1st Cavalry Division and received the Purple Heart in the line of duty. A Brewster resident, Castelli was instrumental in assisting Putnam County in becoming the first Purple Heart County in New York State. He also spearheaded the efforts to replace the Southeast Honor Roll on Main Street.

“We would not be here tonight if it were not for the passion of Denis,” said Odell. “He understood the importance of documenting our support of Veterans and acknowledging the sacrifices they made so we can be free. Becoming a Purple Heart community promotes patriotism and ensures that the soldiers’ legacies live on.”

Castelli served as Putnam County Historian from 2012 until his death, he also held the position of historian for the Village of Brewster. In addition, Castelli was a member of the VFW Post #672 in Brewster and assisted Congresswoman Nan Hayworth for two years as a Veterans advocate.

”Becoming a Purple Heart Town on the anniversary of Denis’ death is felicitous,” said Southeast Councilman Edwin Alvarez. “He, like so many Veterans, was the epitome of President John F. Kennedy’s quote ‘My fellow Americans, ask not what your country can do for you, ask what you can do for your country,’ “We are forever indebted to those who have served to preserve our way of life today. It was an honor and privilege to stand before members of the Military Order of the Purple Heart and be of service to them.”

As a Purple Heart Town, Southeast recognizes Veterans who are recipients of the Purple Heart Medal. It also acknowledges the commitment and sacrifices made by military service members and their families, including Gold Star and Blue Star Mothers, and it pledges to continue to honor and support their contributions.

“Our Veterans are such a meaningful part of our communities,” said Odell. “They have defended our freedom and protected our values. Putnam County, as well as the towns that have been given the Purple Heart distinction, is honored to be able to do this small part in giving back to those men and women who have proudly served in the U.S. Armed Forces.”

“Having three towns follow the County’s lead in becoming a Purple Heart community shows how committed the people of Putnam are to our Veterans,” said Odell. “I hope that the other three towns and the three villages consider accepting the designation as well.”